The essay that I have given its own page began life about twelve years ago as an undergrad literary criticism exercise (A+). After neglecting it for all that time, I became inspired by the recent Jean Rhys Reading Week, in which I participated, to polish and enlarge it a bit. It is still a work in progress.

I suppose some people might think that with a title like that it must be a joke or written by a “Walking Dead” fan, which I am not. In fact, it’s a serious–if a bit fanciful–look at the author’s responsibility (if they have one) for the manipulation of their characters. The original purpose of the exercise was to say something about intertextuality but this question of an author’s “authority” seems much more interesting now.

I had been fascinated by Jean Rhys as person and writer for years before becoming a mature student  and grabbed the chance to express something about my complicated feelings about her and her work. I hope, if you are an admirer of Rhys—or perhaps, more importantly, if you are not—you will see the novels with a new appreciation.

Is this image funny or uncannily like a scene from Rhys? Her woman as mannequin/zombi. 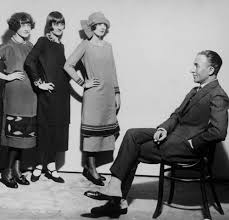